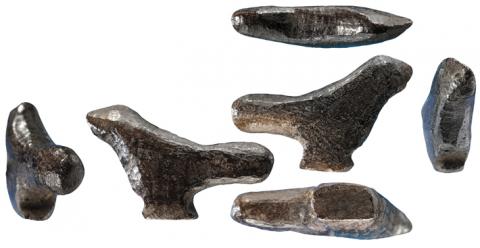 "A Paleolithic bird figurine from the Lingjing site, Henan, China"

Abstract: The recent identification of cave paintings dated to 42–40 ka BP in Borneo and Sulawesi highlights the antiquity of painted representations in this region. However, no instances of three-dimensional portable art, well attested in Europe since at least 40 ka BP, were documented thus far in East Asia prior to the Neolithic. Here, we report the discovery of an exceptionally well-preserved miniature carving of a standing bird from the site of Lingjing, Henan, China. Microscopic and microtomographic analyses of the figurine and the study of bone fragments from the same context reveal the object was made of bone blackened by heating and carefully carved with four techniques that left diagnostic traces on the entire surface of the object. Critical analysis of the site’s research history and stratigraphy, the cultural remains associated with the figurine and those recovered from the other archeological layers, as well as twenty-eight radiometric ages obtained on associated archeological items, including one provided by a bone fragment worked with the same technique recorded on the object, suggest a Late Paleolithic origin for the carving, with a probable age estimated to 13,500 years old. The carving, which predates previously known comparable instances from this region by 8,500 years, demonstrates that three-dimensional avian representations were part of East Asian Late Pleistocene cultural repertoires and identifies technological and stylistic peculiarities distinguishing this newly discovered art tradition from previous and contemporary examples found in Western Europe and Siberia.