New Book: The Origin of Cattle in China from the Neolithic to the Early Bronze Age 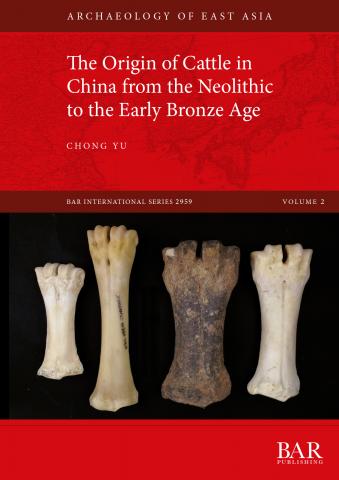 Cattle (Bos taurus), domesticated from the extinct aurochs (Bos primigenius), has been an important animal to many human societies since prehistoric times. Cattle provides not only meat for subsistence, but also hide, blood, dung, milk and traction that contribute to the organization of human beliefs, cultural attitudes and social complexity. This book provides the widest range of cattle bone biometrical information from the Early Neolithic period to the Early Bronze Age (10000 to 3600 years ago) and investigates the morphological variation of this animal from a biological point of view: the main indicator for tracing domestication. The results suggest that cattle in ancient China was imported from the Near East around 4,300 years ago and made their first appearance in the Yellow River Valley. Once they had arrived in central China, these small-sized domesticated cattle soon spread and was exploited intensively from then on.

AUTHOR
Chong Yu is an associate professor at Sun Yat-sen University. She is a zooarchaeologist researching various aspects of bio-cultural evolution including the origins and spread of animal domestication, palaeoeconomy, food processing, ritual, and cultural uses of animal bones. This includes regional and comparative studies on Neolithisation, early civilisations, hierarchy, and social complexity with a special interest in ancient Asia.

REVIEW
‘Research on cattle domestication in China is in a period of great change and new revelation. Yu Chong’s manuscript contributes important biometric data that complement the growing zooarchaeological and genetic evidence for overlapping exploitation of domestic and wild cattle populations during the Neolithic and Bronze Age. Dr. Yu’s careful re-analysis of existing zooarchaeological collections is impressive and thorough. Her work shows how new insights can be gained by re-visiting existing zooarchaeological collections in China with new methods and new research questions.’ Dr Katherine Brunson, Brown University