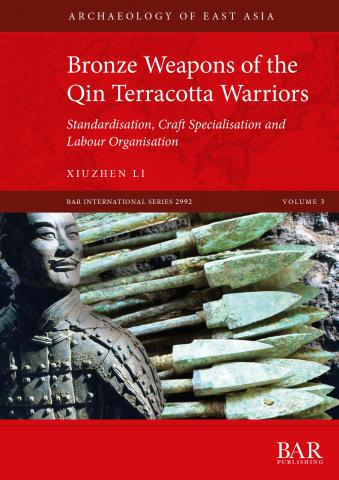 Over 40,000 lethal bronze weapons were discovered with thousands of terracotta warriors in the tomb complex of the Qin First Emperor (259-210 BC). This book carries out the first systematic and comprehensive study on these weapons to investigate the mass production and labour organisation in early imperial China.  The research draws upon extensive measurements, typological analysis and related statistical treatment, as well as a study of the spatial distribution of the bronze weapons. A combination of metrical and spatial data is used to assess the degree of standardisation of the weapons’ production, and to evaluate the spatial patterns in the array of the Terracotta Army. This provides further information about the labour organisation behind the production, transportation and placement of weapons as they were moved from the workshop and/or arsenal to the funeral pits. Integrating these insights with inscriptions, tool marks, and chemical analysis, this book fills a gap in the study of mass production, the behaviour of craftspeople, and related imperial logistical organisation in the Qin Dynasty (221-206 BC), marking the most crucial early stage in Chinese political unification.

AUTHOR
Xiuzhen Li is a senior archaeologist at the Museum of the Qin Terracotta Army, China, and has also recently become a departmental lecturer in Chinese Archaeology at University of Oxford. She has contributed substantially to the international collaboration between the Museum and University College London, first via a doctoral project and since as a UCL Honorary Senior Research Associate.

REVIEW
'The research methods adopted are innovative and original. The systematic metrical measurements and spatial analysis of the distribution of different types of bronze weapons in the sacrificial pit are especially impressive.’ Professor Jianjun Mei, University of Cambridge

‘All of these data are completely new and have made a significant contribution to the overall understanding of the production organization in late Bronze Age China.’ Dr Ruiliang Liu, University of Oxford