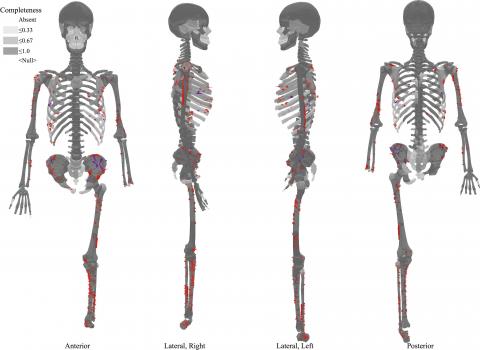 Abstract: Modern shark attacks are uncommon and archaeological examples are even rarer, with the oldest previously known case dating to ca. AD 1000. Here we report a shark attack on an adult male radiocarbon dated to 1370–1010 cal BC during the fisher-hunter-gatherer Jōmon period of the Japanese archipelago. The individual was buried at the Tsukumo site near Japan’s Seto Inland Sea, where modern shark attacks have been reported. The victim has at least 790 perimortem traumatic lesions characteristic of a shark attack, including deep, incised bone gouges, punctures, cuts with overlapping striations and perimortem blunt force fractures. Lesions were mapped onto a 3D model of the human skeleton using a Geographical Information System to assist visualisation and analysis of the injuries. The distribution of wounds suggests the victim was probably alive at the time of attack rather than scavenged. The most likely species of shark responsible for the attack is either a white shark (Carcharodon carcharias) or a tiger shark (Galeocerdo cuvier). Shortly after the attack most, though not all, of his body was recovered and buried in the Tsukumo cemetery.