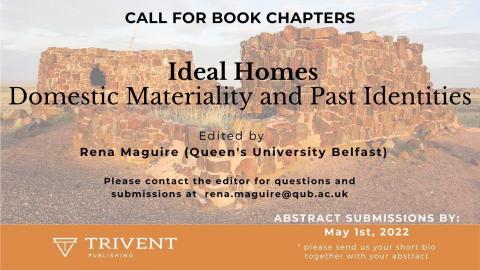 Briefing: What happened is, we grew lonely living among the things, so we gave the clock a face, the chair a back, the table four stout legs which will never suffer fatigue.

Even what was beyond us was recast in our image Lisel Mueller. “Things” Mobile societies of the past may well have defined their sources of security and socialisation in different terms than later agricultural peoples, as an entire landscape was ‘home’ for them.

Structures which had provided temporary shelter for those who followed herd and shoal became permanent (or even semi-permanent) formalised nodes of domestic relationships, security, nurture, personal maintenance, and industry from the Neolithic onwards. The combination of activities and social relations produced considerable innovation in domestic objects and how they were used, some of these even being taken to the grave, presumably for use in an afterlife.

Did the objects generate the concept of ‘home’, or did the type of dwelling influence the style and use of the artefact? Did activity and artefact generate identities and roles? To what extent can experimental and experiential archaeology give a genuine flavour of domestic life in the past?

This volume invites scholars exploring the relationships between domestic activity, crafts and artefacts of peoples of the past, each paper illustrating different aspects of the process of domestic life and artefactual innovation which occurred through everyday life.

Please contact the editor, Rena Maguire on rena.maguire@qub.ac.uk for questions and submissions.

Via Archaeological (https://trivent-publishing.eu/79-via-archaeologica) is a new series of material culture archaeology texts. The editor is looking for submissions from the East Asian region, especially those with an experimental archaeology touch, for its inaugural piece.