Obituary for Sarah Nelson, Past President of SEAA 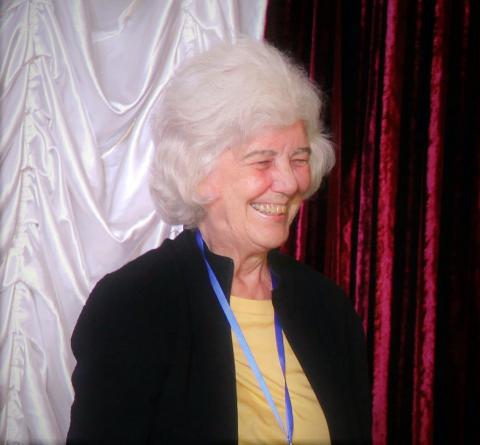 A personal tribute to Sarah Nelson

Sarah Milledge Nelson (1931–2020) reached the ripe old age of 88 and a half before she succumbed to the long-standing leukemia and late developing kidney problems that led to her death on April 27th. These did not keep her from attending a conference in Germany in January where we last met – I have never known anyone more adventurous and ready to travel. She admitted that her family motto was “Why not? … especially if the question has ‘go’ in it”!

Sarah put enormous amounts of energy into her chosen fields of, first, Korean archaeology, then northeastern Chinese archaeology, and finally into gender studies. In the first two, she has been a path-breaker, treading where few Western women were allowed to go. In the latter, she was a pioneer in challenging patriarchical organization of archaeology, publishing, and fieldwork through her entire career, culminating in her book on Shamans, Queens, and Figurines cited below. For those who want to hear about her life in her words, she gives extensive autobiographical contexts for each stage of her research in this book; they are an eye-opener to the hurdles she had to overcome in becoming one of the foremost East Asian archaeology scholars today. Moreover, they illustrate how serendipitous the development of research can be, where barriers and opportunities crop up in unexpected quarters – a good lesson for beginning students. I wish more of us would be as brave as Sarah to write about our career experiences, warts and all; they form important contexts for and constraints on the development of our thinking.

I first met Sarah at the University of Michigan in 1972, when she returned to defend her thesis on the Korean neolithic and I was a first-year grad student. I was amazed to find that not only did she overcome the barriers of doing fieldwork as a female with three school-age sons to care for in foreign, male-dominated Korean society, she had to “learn the rules, and then…break some, and once in a while…create new rules” to order to “play in the field of archaeology”. These latter actions also applied to doing archaeology in the United States, since patriarchical attitudes were not confined to Korea.

Having had brief encounters at various conferences, twenty years later at the Association for Asian Studies (AAS) meetings in Chicago in 1990, I invited Sarah and others interested in East Asian archaeology to attend a Roundtable Discussion on “Politics and Procedures for Archaeological Fieldwork in Asia”; the Roundtable served as the forum for the formal constitution of a network form to support and connect us across the countries in which we lived and did fieldwork. Sarah presented on the Earthwatch volunteers’ participation in her data-collection project in Korea. From this meeting grew EAANetwork (East Asian Archaeology Network), with a newsletter, EAANnouncements. Sarah was ever supportive of EAANetwork, agreeing to act as North American Treasurer until April 1996 when she participated in transforming EAAN into the Society of East Asian Archaeology (SEAA) at the AAS meetings in Hawaii. She was signatory to the constitution that eleven of us or so hammered out in long sessions at a Honolulu coffee shop, and she agreed to become the first Vice-President of the organization, with me at the helm. The first SEAA Worldwide Conference was held there in Honolulu preceding the AAS meetings.

In January 1996 before the momentous events in Honolulu, I had just begun a new job at the University of Durham with the promise that I would have four years for research before becoming Head of Department. That promise was broken by the current Head taking unexpected early retirement, and after 18 months at Durham, I became HoD and was thrown into preparations for both the periodic Teaching Quality Assessment of all departments without prior notice or training, and the periodic Research Assessment Exercise (RAE), for which my department of East Asian Studies depended greatly on my research. The job of SEAA President was too much under those circumstances, and I resigned asking Sarah to succeed me – which she did in her ever-ready good humour. She served as President of SEAA for six years (the remaining two of mine plus her succession) from 1998–2004.

Sarah also took over a project I had been unsuccessfully trying to get started in the northeast of China at the Niuheliang site in Liaoning since 1994. It was a difficult time to obtain a permit for fieldwork in China (even KC Chang was having trouble), and my Japanese connections did not help the situation. Moreover, with the RAE demanding research publications, I could not continue a project that was not resulting in journal articles. Sarah had first visited Niuheliang in 1987, was close colleagues with northeastern archaeologists, and had just published a book on Dongbei archaeology. So I turned to her to continue the work at Niuheliang. She was thus my saviour on two fronts.

Sarah was more than a colleague to me: she was my senpai at the University of Michigan, blazing a trail where no western woman had been into East Asian archaeology. I followed in her tracks, learning from her innate ability to master difficult situations, revelling in her insights and wit, and vicariously enjoying her extensive travel experiences. As a colleague I admired her multiple language proficiencies, her determination against all odds to carry out fieldwork under extreme handicaps, her prolific writing talents, and her ability to pull people together to work on innovative projects. As a friend, I was lucky to be able to visit her home in my home state, meet abroad for coffee and talk, and see her at frequent conferences. I will miss her greatly, but I know her influence will live on among us, as we wouldn’t be as we are now without her trail-blazing endeavours.

Quotes above are from her semi-autobiographical book, Shamans, Queens, and Figurines: the development of gender archaeology (Left Coast Press, 2015)