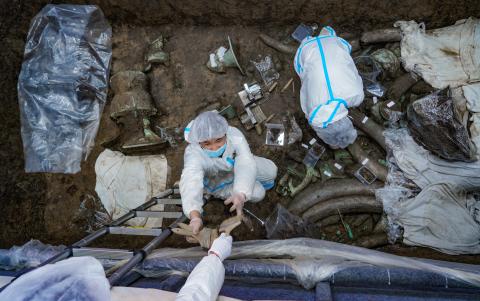 The following is the English translation of a Danish article by Peter Harmsen, first published in Weekendavisen

On the border of the desert, near the Great Wall of China, lies the 4000-year-old ancient city of Shimao. Here, in recent years, archaeologists have made one important discovery after another, and along the way, they have been forced to revise their assumptions about how civilization originated in what is now called China.

Shimao is surrounded by an inner and an outer city wall of a total of ten kilometers, and inside the center is a step pyramid with a height of 70 meters. Jade figures and human-like reliefs tell of a lively cult practice, and the discovery of dozens of skulls belonging to young girls sacrificed to an unknown god testifies that the religion also had a gloomy side.

Nothing had prepared the researchers to find a complex urban community right here, and Shimao should have the status of Tutankhamun's tomb or Stonehenge, but it has not. Rather, it is virtually unknown outside of China.

It is an expression of a marked bias in the global consciousness of the prehistory of mankind. While Egypt with its pharaohs and obelisks is childish for anyone who has read Asterix and seen The Time Commandments with Charlton Heston, China is archaeologically closed land to most people in the Western world.

According to Rowan Flad, an archaeologist at Harvard who specializes in, among other things, the Chinese Bronze Age, it is extra unfortunate because discoveries are currently taking place in China, which overshadow most of the other research around the world.

"In Egypt you return to the same river valley again and again, and of course you find lots of exciting things, but China is just so many times bigger with lots of different places to explore, and it is only in recent years that the Chinese really to a sufficient extent has embarked on archaeological excavations. So in that sense, it's really where it's going right now, if you're an archaeologist, ”he says.

Anke Hein, a researcher in East Asian archeology at the University of Oxford, agrees that developments in China deserve much more attention. Among recent discoveries, she highlights Liangzhu, a culture from the Neolithic that has emerged close to Shanghai.

So far, Liangzhu has been best known for a large number of tombs with widely differing equipment, which suggest a strongly class-divided community. Recently, however, it has been supplemented by the discovery of an ingenious system of dams and canals that were to protect the low-lying area from floods and, conversely, provide water to the fields during periods of drought.

"It's really massive and comprehensive, and it has not received the media attention it deserves. If something similar had been found in Egypt, it would have been the subject of far greater interest, internationally, ”says Hein.

There are several reasons why Chinese archeology is currently in what some describe as a "golden age". First, there is just so much that has not yet been discovered and that is toppling out of the ground almost daily. While a bag of Viking coins may attract much attention in our part of the world, researchers in China may be lucky to come across entire cities.

When the discoveries right now take place with a particularly hectic cadence, it is partly due to the fact that China has for a couple of decades been busy building a modern infrastructure from scratch. Often it is during excavations for new parking garages or railway lines that the finds are made.

In those cases, archaeologists are thrown into a race against time to save as much as they can now before modern economic needs take hold and the whole thing is filled up with concrete. That archaeologists are often not called in because builders fear costly delays is another matter.

Another factor behind the archaeological boom is a growing professionalism. Chinese archaeologists, often with distinguished foreign titles on their resumes, have become familiar with the latest archaeological techniques. Episodes such as the excavation of the terracotta warriors in the northeastern Chinese city of Xian in the 1970s and 1980s, in which the vivid colors of the statues peeled off shortly after coming into contact with the air, are now mostly a thing of the past.

Finally, Chinese archaeologists are benefiting from state support of a magnitude that their Western counterparts can mostly only dream of, but it is not just basic curiosity that is causing politicians to shell out, says Michael Storozum, an expert in Chinese archeology at Hebrew University of Jerusalem.

"Chinese domestic policy plays a major role. "President Xi Jinping is a huge fan of archeology, because it is a discipline that can literally help build a national history, and he actively urges archaeologists to discover the 'roots of Chinese civilization' by funding mega-projects." he says.

The question is why so little of the new knowledge reaches the West, and not least to the Western public. At the low-practical end, there is the language barrier. Although more and more Chinese archaeologists are publishing their findings in English, there is still a significant portion of the research that is only available in Chinese.

If you, as a Western archaeologist, need to keep up to date with the latest developments in China, it is a good idea to indulge in Chinese characters. But that is not necessarily enough. It is also advisable to know Japanese for household needs, as there is also extensive expertise in the field in Japan.

It is just not realistic for more than a few Western archaeologists to become familiar with one or two complicated Asian languages in addition to their actual specialist knowledge.

Another explanation for the lack of Western knowledge of the situation in China is that the country is far outside the reference framework of most Westerners. This is in stark contrast to, for example, ancient Egypt or elsewhere in the Middle East, where new archaeological knowledge immediately makes sense in a Western culture shaped by the Bible, according to Liu Li, a Chinese-American archaeologist at Stanford University.

"Many new discoveries or reinterpretations of existing finds from the Near East are sold to the public with reference to stories in the Bible," she says.

Another explanation for the particular focus on Egypt is the legacy of the imperialist era, in which Western archaeologists heroically Indiana Jones traveled on adventures in the hot lands and brought treasures home to their museums.

Egypt has held a very special position as a playground for Western scientists since the Napoleonic Wars, while China was never exposed to Western colonialism and its accompanying phenomenon, the tropical helmet-clad archaeologists, to exactly the same extent.

This has implications to this day, says Jade Guedes, an anthropologist at the University of California San Diego: who is behind it. ”

Lack of knowledge about the great discoveries in China leads to gaping gaps in our knowledge of the past. For example, in the West we get a distorted picture of the origins of Chinese civilization. It was not a unitary culture with an origin around the Yellow River, as the Orthodox version sounded until not so long ago, but had its roots in a number of different ancient societies, which only later merged.

Some of the societies were of a radically different nature from what we otherwise associate with China. During excavations in Sanxingdui in the southwestern province of Sichuan, the contours in recent years have been marked by a civilization with a very special aesthetic that can seem completely supernatural.

"Basically, we risk a lack of understanding of how diverse prehistoric China was. There were a large number of cultures and kingdoms and competing traditions, ”says Storozum from Hebrew University.

"Nowadays, it is all too often overshadowed by a narrative about China as a cohesive political and economic entity rather than a place with a variety of traditions, which often turn out to have a long history in conflict with each other."

Without knowledge of China's prehistory, we will be missing an important piece in understanding the evolution of all mankind. The discoveries that are being made in China are relevant to larger questions about how we as humans organize ourselves in society, says Rowan Flad from Harvard.

“We can take Chinese cities in the first and second millennia before the birth of Christ and compare them with early urban communities in the Mediterranean or South Asia or America. It is only by looking at the variation in early urban development in different places around the world that we can really get a sense of what cities are for a size, ”he says.

The alternative is a strangely one-sided and contextless understanding of human evolution from prehistoric to historical times, according to Li Feng, professor of early Chinese history at Columbia University.

“We are missing out on a fantastic opportunity to fully understand Western civilization based on an awareness of the different choices that were available at each stage of development. It is only possible if we have a civilization of similar scope and duration that we can use to compare with, ”he says.

A more in-depth pursuit of Chinese archeology will tear us out of our comfort zone, but that may be exactly what makes it extra difficult, according to Anke Hein of Oxford.

"Material from China may help us to question that the way in which development has taken place in Europe and the Middle East from prehistoric times to the present day represents the norm that it must necessarily take place in that way, and that it is that's how things develop everywhere else, ”she says. "It is based on a Eurocentric worldview. A knowledge of how history unfolded in China can shake it, and it is, of course, uncomfortable. We like that our stories are exciting, but at the same time they should preferably be recognizable to a certain extent. We like when something is exotic, but it must not be too exotic either. It is very difficult to change.”